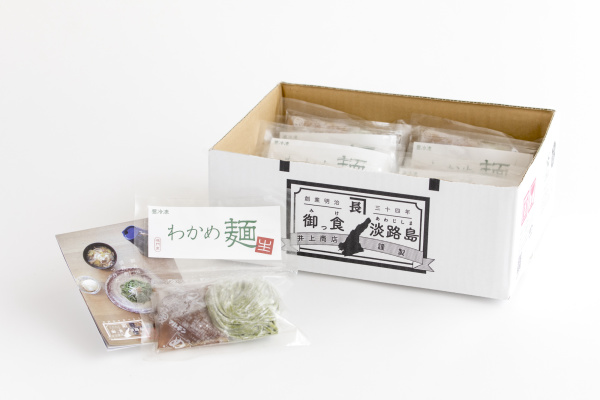 Awaji Island in Hyogo Prefecture has been praised as Miketsukuni (the region of food) for its offerings to rulers and the imperial court. Inoue Shouten has been providing Awaji Island cuisine on and outside the island for over 120 years. Of their many delicacies of Awaji Island, for this article, we will introduce Wakame (seaweed) Noodles developed over more than 60 years, perfect for a gift.

The following are highlights of Inoue Shouten’s Wakame Noodles.

Noodles are created with seaweed from the Naruto Strait, grown thick from the swift ocean current

Thick seaweed harvested from Naruto Strait near Awaji Island is used for the Wakame Noodles. The seaweed in Naruto Strait grows in the tumultuous waters of what is said to be the largest whirlpool currents in the world, which contain nutrients from the Yoshino River, Harima Sea, and the Pacific Ocean. This environment creates seaweed rich in dietary fibers and minerals with a fragrant taste and thick flesh.

Noodles made by the Inoue Shouten’s unique wakame paste method creates noodles that have a stronger seaweed fragrance, unique texture and a vivid green color when compared to powder manufacturing, which dries seaweed into powder.

The packaging for Wakame Noodles Gift Set communicates the store’s desire to deliver the goodness of Naruto Strait-grown seaweed and other Awaji Island delicacies to many people.

Furthermore, the gift box can be decorated with an original noshi (traditional wrapping paper for formal gifts) motif featuring underwater seaweed, designed by the former company president’s wife, and the current president’s wife—perfect for a gift.

Hyogo Prefecture’s Awaji Island was known for its offering of mostly seafood to the emperor and the imperial palace, and was praised as a “region of food” along with the Wakasa Province (currently the south-east area of Fukui Prefecture) and Shima Province (currently the east area of Mie Prefecture). The pages on Emperor Nintoku in the Kojiki (Records of Ancient Matters) say that “cool waters drawn at Awaji Island were offered to the emperor,” noting that even drinking water was transported from Awaji Island.

Even now Awaji Island is home to a diverse lineup of food, such as Awaji Island onions, which have a strong sweetness and less sharpness. Of the many blessings of Awaji Island, the Inoue Shouten Wakame Noodles promote the goodness of seaweed to many people on and outside of the island.

Inoue Shouten was established in 1901 as an udon noodle restaurant. The second-generation shop owners noticed that frozen udon noodles were still delicious even after they were thawed, and started focusing on frozen noodles. Once the shop launched their frozen instant ramen noodles, the noodles were so popular that their manufacturing could not keep up with the demand. However, due to the launch of instant ramen noodles from major companies, the shop found their sales starting to fall. With this, they started trial production of seaweed noodles as a new business venture.

The idea for seaweed noodles came about when Inoue Shouten thought of combining its noodle manufacturing business with an Awaji Island specialty food, because the island used to be known as a “region of food.”

It is said that the reason Inoue Shouten selected seaweed as an ingredient from all other specialty foods was because “most common seaweed dishes such as tsukudani (food boiled down in soy sauce) have a black color—we wanted to create noodles with the color of fresh seaweed right after it is blanched.” However, no matter how many times the second and third generation owners tried, the finished products were brittle, breaking into pieces not resembling noodles.

Still, the family did not give up. Thirty years after the initial idea of seaweed noodles, the fourth-generation company president Yoshio Inoue, who had studied food engineering in college, developed an original paste manufacturing method that stepped away from the conventional powder method and created a paste to be kneaded into noodles. With this, he successfully created noodles for the first time. This was the origin of the wakame soba noodles. However, as the udon culture is stronger in the Kansai region, noodle sales proved to be sluggish. Yoshio decided to create an edgier product that would boost the presence of Awaji Island delicacies. He went on to develop noodles containing the maximum amount of seaweed possible without breaking, and 60 years after the original idea and 30 years after the first wakame soba noodles, the current Wakame Noodles was born.

The brightly-colored noodles offer an enjoyable, smooth but chewy texture with a burst of seaweed flavor. The thickness of the noodles was decided through much sampling by employees during the product’s development. There is special focus on the thickness of the noodles for further enjoyment. The noodles feature a combination of Hokkaido and Hyogo Prefecture flour for its texture, and salt for taste is from Hyogo Prefecture’s Ako region.

What is more, Inoue Shouten also actively teaches udon noodle-making at elementary schools in Hyogo Prefecture along with other activities, and was commended by the Ministry of Education, Culture, Sports, Science and Technology in 2016.

Creating foods only they can make

The reason why Inoue Shouten did not give up developing noodles over three generations of failures and setbacks was because, “there is a company atmosphere that pushed us to create a product only we could make,” says Yoshio.

“The second and third generation had already been leaning towards developing something unique and impactful. I believe that in order to survive as a company, the policy of ‘creating a fun and edgy product only we can make’ was born to prevent us from being on the same page as major companies. Now, this phrase is used daily in the company,” says Yoshio.

The recommended way to eat Wakame Noodles is “simply as a zaru (chilled, dipped noodles)” according to Yoshio. The noodles are delivered frozen to maintain their texture and flavor. The dipping sauce is also delivered frozen, allowing for easy cooking by just a quick boil for the noodles. One tip when boiling noodles is to put frozen noodles into boiling water. A quick rinse in cold water will create a smooth but chewy texture with an elegant seaweed taste. Adding laver or grated yam to one’s preference is also recommended.

Wakame Noodles create a delicious splash of color in daily dining. How about sending a gift to someone you know?