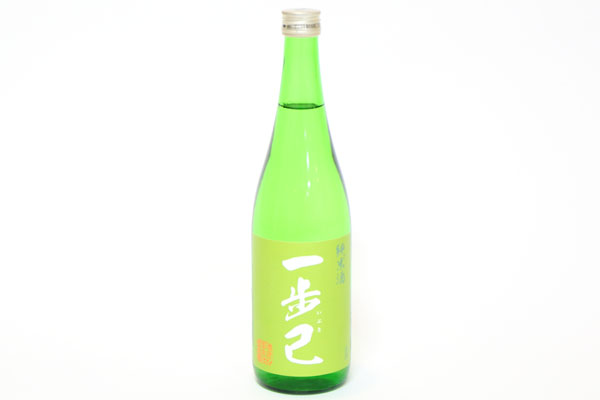 Everyone takes a first step at one time or another. The featured product is Japanese sake that makes a perfect gift. It was the first step taken by Kensei Yanai, 9th generation kuramoto of Toyokuni Shuzo, a brewery with over 180 years of history in Furudono, Ishikawa District in Fukushima Prefecture, one of the most famous sake-brewing areas in Japan. The name of the sake is IBUKI (meaning First Step).
Kensei is both the kuramoto (manager of brewery) and toji (master brewer).

Kensei is currently the brewery manager and master brewer, but he used to hate that the family business was “rural and lacked having a young image.” He heard about the job of brewery manager and master brewer and gradually became interested in the world of sake brewing where there had been an increasing number of young brewers. In 2010, he returned to his family brewery and produced this IBUKI sake the following year.

IBUKI was created with a passion and unfeigned skill for sake-making; and as the name of the sake implies, the delicious flavor increases with each step. Today, this sake is so popular that it is difficult to obtain.

The editorial team here at SHUN GATE was lucky enough to receive IBUKI from Toyokuni Shuzo to try. In this article, we give you our impressions of this product, including taste, appearance and other important considerations.

Upstanding freshness of the sake producer

The first thing that catches the eye is the label, which is the color of fresh green leaves. In the center is the name of the sake, IBUKI, expressing Kensei’s wish for “treasure every step” combining the word ibuki, which means breath of life. On the back label is a message from Kensei. Read it before taking a sip of the sake.

Toyokuni Shuzo is a brewery that produces Azuma Toyokuni, sake that has won the Gold Prize nine years in a row at the Annual Japan Sake Awards. The brewery uses a rich water source from Abukuma gorge to produce sake by a traditional brewing method in a stately brewery built some 130 years ago.

Production of IBUKI begins with washing the sake rice by hand. In one season, six people carefully hand-wash 20 tons of rice. This enables them to gauge the quality and state of water absorption, which enables successive steps to proceed more smoothly. Then malt and shubo (large volume of yeast cultured before moving on to the fermentation process) are made and put in enamel tanks with water and rice to ferment for approximately one month.
Sake is brewed for approximately six months, from November to April. The best time for brewing is January and February, and the process during these two months is so delicate that the brew master never leaves its side, says Kensei.

Most of the sake rice used to make IBUKI is Miyama-Nishiki, which is produced locally in Fukushima. Mr. Oshima, a rice farmer who fully supports the challenges of the 9th generation brewer by supplying the best rice for sake, says, “I’m so happy sake is made using local rice. Kensei is unyielding in his quest for quality, so I know that he will continue to make great sake.”

To be honest, IBUKI made in the first year did not taste good at all, says Kensei.
“Thinking back, I was trying to brew sake by just following the steps. I didn’t want to be disappointed with the result again in the second year, so I began taking a careful look at the characteristics of rice and made changes in the process, changes such as lowering the percentage of alcohol or making it sweeter, always conscious of the image of the finished sake. I still don’t know when the sake is complete. Every year, both the rice and climate are different. If I don’t give it my all, customers will not be satisfied. Maybe there is no end to my work.”

I am sure everyone would like to try IBUKI; unfortunately, its popularity has made it scarce in the market and it is not easy to get hold of a bottle. I visited a sake shop that sells IBUKI.

Liquor Store Kitsunai owner Kenya Kitsunai sells IBUKI in Fukushima City. He says that “liquor stores speak for the brewery.”
Kitsunai knows everything about Japanese sake brewed in the prefecture. He has a strong relationship with breweries; and he does not just sell sake to customers who come to his shop, but also tells stories of the brewer.
“IBUKI is great tasting sake sold at a reasonable price. Not just IBUKI, but there are many new sake brand made by young brewers in Fukushima, and it is really getting interesting.”

The brewer’s skills, farmers producing sake rice, liquor shops delivering it to customers, people who enjoy sake…
“You cannot make delicious sake when even one of them is left out of the process,” says Kensei. Do try IBUKI and taste sake created by a young brewery manager and master brewer who thinks into the future and of the people who support his efforts.