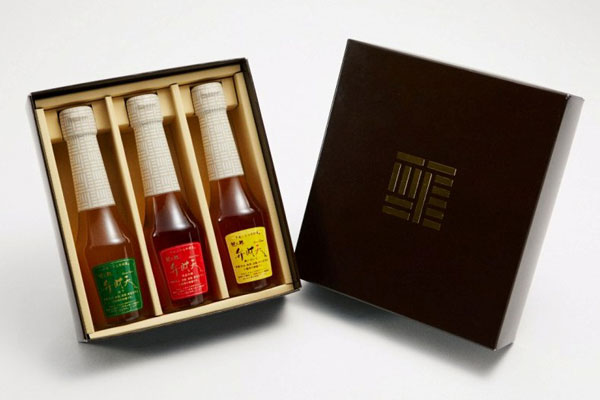 Vinegar is a staple cooking ingredient along with sugar and salt. It is considered a healthy addition to the diet, known to aid digestion and improve blood circulation. Yet compared to other standard ingredients, vinegar is seldom used in Japan, other than in vinegared rice (typically sushi) and specific dishes that call for vinegar. Presumably this is because vinegar is perceived as sour. A new product called Nomu Su Dessert VinegarR from a store called Expre・ss Tokyo OSUYA GINZA aims to transform the traditional conception of vinegar as a seasoning into the notion of vinegar as an exciting health-giving beverage. The dessert vinegar range is made from a variety of different fruits. In this article, the SHUN GATE team reviews Benzaiten, named after the only female god among the seven gods of fortune responsible for beauty, art and treasure. The deity Benzaiten is worshipped at the Daiganji temple down at Miyajima. The product Benzaiten, meanwhile, is a fruit-based vinegar fermented with acetobacter that has been blessed at the same Daiganji temple. As such, it is an ideal gift, combining as it does health-giving benefits, delicious taste and good fortune. Plus it is only available at this particular time of year.

The editorial team here at SHUN GATE was lucky enough to receive a box of Benzaiten dessert vinegar to try. In this article, we give you our impressions of this product, including taste, appearance and other important considerations. We also speak to Mitsuyasu Uchibori, who is a leading sumurie (a sommelier for vinegar) and owner of the Expre･ss Tokyo OSUYA GINZA store.

The label heralds the good fortune to come in the year 2015, and certainly the bottle presents as an omen of good fortune. And the fact that it has been made using acetobacter blessed at Daiganji temple only adds to the allure. We will be sampling three flavors: yuzu (citron), Japanese apple and Setouchi lemon. These are diluted in water, with no additives that could mask the true flavor.

Our first sample is the yuzu flavor. It has a rich, mellow bouquet that lingers on the tongue afterwards together with a pleasant hint of acidity. No doubt it would make a delicious winter drink mixed with hot water.

Our yuzu is sourced primarily from Kochi prefecture at the moment. It has a nice fragrance thanks to the gentle sea breezes in Kochi. OSUYA GINZA has a special slow and gentle technique that does not allow the yuzu to become too bitter, while at the same time accentuating the flavor of the fruit. This year has been an excellent vintage for yuzu vinegar that really does justice to the fragrant taste.

Japanese apple dessert vinegar offers the perfect balance between sharp invigorating apple fragrance and fruity sweetness, a gentle blend of apple sweetness and the special sourness of vinegar. It is quite similar to drinking fruit juice.

We mainly use Fuji apples from the Shinshu region, famed for being light and sweet, and Jonagold apples from Aomori, which have a rich sweetness with strong overtones of nectar. Normally we only use one variety at a time, but for Benzaiten we blend two varieties in order to get the right balance of lightness and sweetness. I recommend this one mixed with nothing more than cold water, which brings out the delicious apple sweetness.

Setouchi lemon is characterized by sharp acidity with a hint of sweetness. Normally this product would be taken with plain water or soda water. Its slightly sour flavor makes it an excellent addition to salads too.

The lemons are sourced from the Setouchi region, home to the famous Itsukushima Jinja shrine. The Japanese climate produces lemons that have a pleasant degree of sourness and are very juicy. The acetobacter has been very active this year, allowing us to employ a slow and gentle fermentation process that brings out the true flavor of the fruit. You can drink this one together with fizzy drink. It’s a lovely way to rehydrate and boost Vitamin C during the winter months.

From humble seasoning to high-class beverage new horizons for vinegar

The vinegar products served at OSUYA GINZA are made by Uchibori Vinegar, a traditional brewer of vinegar operating for over 130 years in the town of Yaotsu in Gifu prefecture. Formerly a flourishing river port on the Kiso river, Yaotsu still retains much of the original streetscape today, including a number of sake merchants who continue to brew sake the traditional way.

Uchibori Vinegar still uses some of the original warehouse buildings from when the company started up. The SHUN GATE team is lucky enough to get a peek in one of the old warehouses. It is chilly inside, and seeing all the oak barrels lined up quietly in the cold is like going back in time. Mr. Uchibori has lived here since his childhood. We ask how he came up with the idea of dessert vinegar. The reply is surprising: it came to him by accident.

“There are many different types of vinegar, depending on what you start with: rice, grain, wine, malt and so forth. While professional chefs will choose specific types of vinegars to use with particular dishes, most people don’t really distinguish one from the other. Everyone has heard of vinegar but it is generally seen as little more than something you use to add acidity to a dish. In fact, it’s probably one of the least understood condiments in the modern kitchen. So I wanted to popularize vinegar, expand the horizons, make it into something that people could feel more familiar with. And that’s when I hit on the idea of using fruit juice as the base.
“It’s hard to describe vinegar made from fruit juice. You just have to try it for yourself. It’s only once you’re used to the taste that you start to realize all the ways you could use it. To begin with, I came up against the strongly held preconception of vinegar as something that is too tart to drink. But once I was able to demonstrate that it works well as a tangy dessert topping for yoghurt or ice-cream, people were more inclined to try drinking it. And of course they loved it, and then the whole thing took off.”

Made from microorganisms grown with clear sparkling water and fresh air

Nomu Su Dessert VinegarR has revolutionized the concept of vinegar. And yet the basic production method used to make vinegar from fruit juice is the same as the process used to make ordinary vinegar.
At the Uchibori Vinegar main factory in Yaotsu, the town where the company was founded, we learn that the key factors are pure water, clean air, and healthy microorganisms. Yaotsu boasts sparkling clean water and fresh clean air, an environment that is ideal for producing highly active microorganisms.
Uchibori Vinegar has another factory in the Alps of Nagano prefecture. Like Yaotsu, this location was chosen on the basis of clean air and water providing a good environment for healthy microorganisms.

On the other hand, Nomu Su Dessert VinegarR takes much more time and effort to make than standard vinegar.
“At Uchibori Vinegar, we say that making vinegar begins from making sake,” says Uchibori. “In other words, we start by making sake and then transform that into vinegar. The alcohol fermentation process is governed by the sugar content in the starter. You would think that fruit would easily supply the required sugar content, but it turns out that fruit is actually much harder to ferment than traditional alcohol bases such as rice and barley. It takes much longer for a start. And you have to use smaller tanks, because if you use the really large standard alcohol fermentation tanks you get too many unwanted bacterial contaminants in there. Plus you have to monitor the temperature closely the whole way along. The production scale is also very small-about 1 in 3000 compared to our standard vinegar. All in all it’s a very long and involved process, but it’s definitely worth it in order to get the wonderful bouquet of fruit vinegar.

Expanding the horizons of vinegar

Uchibori is confident that Nomu Su Dessert VinegarR is gradually educating consumers in new vinegar flavors and new ways to use vinegar. He describes his goals for the immediate future.
“Once people get used to dessert vinegar, they will want to keep it on hand in the kitchen all the time, so that they can try it in cooking as an alternative to salt, for example, or splash a bit on their meat. We need to show people that there are plenty of ways to use our dessert vinegars, that they’re not just for drinking. This will really open up a new world for vinegar. Personally I enjoy cooking, and one of the things I love to do is to experiment with new ways to use vinegar while enjoying a drink at the same time. I would like to see vinegar embraced as an all-round seasoning, as opposed to just a sour-tasting condiment.”

There are many different types of vinegars in the world made from different types of ingredients: white rice, brown rice, grain, fruit and so on. The excellent Nomu Su Dessert VinegarR produced by leading vinegar authority and sumurieR Mitsuyasu Uchibori celebrates the wonderful taste of vinegar while at the same time demonstrating the inherent appeal and versatility of vinegar. In this way, it opens up a whole new world of potential in the kitchen.

OSUYA GINZA is a very agreeable place to enjoy the delights of dessert vinegar. Located in the exclusive Ginza district of Tokyo, it is popular with locals as well as overseas tourists who are familiar with vinegar from their own cuisine and are keen to try the exciting new culinary phenomenon that is dessert vinegar and perhaps buy a gift to take home.

OThe store offers free samples of products from the Nomu Su Dessert VinegarR range. There is also a cafe serving a range of vinegar-inspired offerings such as beer made with vinegar and desserts like ice cream with vinegar topping. It’s certainly an innovative and unusual menu, and one that you are unlikely to find anywhere else. So next time you’re in the Ginza area, why not pop in to Expre･ss Tokyo OSUYA GINZA and discover the delights of dessert vinegar for yourself.