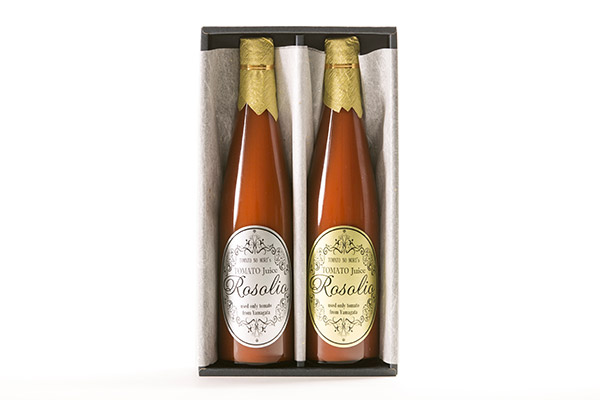 The city of Yamagata in Yamagata prefecture is located in the Ou Mountains, where sparkling river water flows freely and the temperature drops sharply at night, providing the ideal environment for crop farming.

TOMATO NO MORI is an organic tomato farm in the Urushiyama district that practices farming in harmony with nature.

Today we present Rosolio, the premium fruit tomato juice brought to you by TOMATO NO MORI, packaged as a beautiful gift box set containing Rosolio silver and gold.

Rosolio has a deep rich taste and sweetness and a luxuriant smoothness that demands to be imbibed slowly for maximum pleasure. The elegant silver and gold labels add another dimension. All in all, this is a wonderful gift box that would make a fine gift or souvenir for that special someone.

Here are several reasons why Rosolio from TOMATO NO MORI is a great gift idea.

As sweet as fruit

Rosolio Gold has a sugar content of 15, the same as the legendary sweet Satonishiki cherries. Each 500-ml bottle contains the condensed goodness of 1.3 kg of fruit tomato. The depth and richness is something that you can only appreciate as you pour it out of the bottle.
Rosolio Silver, meanwhile, is less complex in flavor, with a sugar content of 12. It combines an underlying sweetness with tones of tomato acidity and umami. The delicious sweet flavor of both Silver and Gold variants will appeal even to those who might normally shy away from tomato juice.

The authentic taste of tomato

Rosolio is made entirely from tomatoes—no salt, water, sugar or any other additives. That way, you know you are enjoying the pure unadulterated flavor of real tomatoes. The product is perfect for those with concerns about food safety. You can drink it straight, or use it as a sauce to mix with yoghurt, or add it to your favorite dish.

Made from delicious all-natural tomatoes

Rosolio is an unusual product name, a combination of the Italian word rosso meaning red and the Spanish word solio meaning royalty.

In many ways the name belies the manufacturer’s supreme confidence in the product. To find out more about the production process that yields the magnificent flavor and texture of Rosolio, we spoke with Masashi Mizusawa, the founder, leader and driving force behind TOMATO NO MORI.

“We decided to call it Rosolio,” explains Mizusawa, “a name that is inspired by the idea of a luxuriant thick sweet juice made from the finest carefully selected ripe red tomatoes. The fruit tomatoes we use are all grown here at TOMATO NO MORI. We take great care in cultivating our fruit tomatoes,” he adds.

To ensure the best possible flavor and minimize consumer concerns, TOMATO NO MORI has slashed usage of agricultural chemicals and fertilizers by 90%.

TOMATO NO MORI employs an organic farming technique that is designed to maximize the natural benefits of the soil. This is “stevia farming,” where the natural plant-based sweetener stevia is the primary fertilizer. Stevia farming is commonly used on fruit crops such as pears, peaches and melons and is known to produce sweet, robust fruit with high nutrient content.

Great care is also taken with irrigation. Tomatoes originally hail from the South American continent, where the soil is typically quite dry. In fact, the lack of moisture is what gives tomatoes their life force and sweetness. So the irrigation regime is carefully regulated to replicate the conditions that will produce the finest tomatoes.

The water used for irrigation is sourced from the riverbed of the Tachiya River that flows down from the Ou Mountains. The river water is treated in an activation system that uses a mineral called tourmaline to provide extra energy to accentuate the inherent umami in the tomatoes.

While TOMATO NO MORI grows many different varieties of tomatoes, the medium-sized Frutica is the only variety used to make Rosolio.

Frutica has a sweetness of about 7–8, higher than any variety in its size class. It boasts a particularly juicy flesh with a smooth resilient texture that delivers a concentrated burst of umami. This is what creates the deep rich smooth taste of Rosolio.

“When we tried to turn it into tomato juice,” recalls Mizusawa, “we had enormous difficulty stabilizing the level of sweetness to produce consistent results.” A great deal of trial and error was required in order to find the best variety, the right quantity and the optimum combination.

Once he had settled on using the home-grown Frutica variety as the sole source of tomatoes for Rosolio, Mizusawa faced another problem: how to ensure a consistent supply of Frutica year-round from which to make his premium juice product. The solution, still in use today, was to harvest Frutica tomatoes in season and immediately transfer them to cold storage where they are maintained in peak condition until needed.

“Rosolio may be expensive compared to other juice products on the market,” says Mizusawa, “but the price is an accurate reflection of the care and attention that we lavish on it.”

“In order to grow farm produce that tastes good and is good for you, you really have to put in the time and effort. And I believe that this sort of value proposition is increasingly what consumers are looking for. My mission is to provide food that you can give to your children confident in the knowledge that it’s good for them and doesn’t contain nasty chemicals or whatever. And through my work, I hope to inspire more young people to take up the noble vocation that is farming. So this is the inspiration behind Rosolio.”

Mizusawa founded TOMATO NO MORI with a vision of making delicious organic tomatoes for children to eat. This vision has propelled him to pursue exacting organic practices that maximize the inherent benefits of the soil, along with a range of initiatives designed to ensure that his tomatoes are of the highest possible standard. But more than that, his boundless enthusiasm and perseverance has delivered us a truly wonderful product in the form of Rosolio premium tomato juice.

Mizusawa’s dedication has brought us Rosolio tomato juice—the pure sweetness and umami of naturally grown tomatoes in a bottle. Try it sometime—you won’t be disappointed.