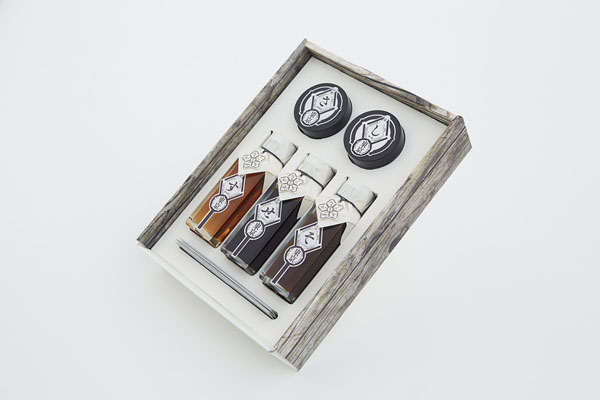 The word Sashisuseso is said to form the basis of Japanese cuisine. It is a combination of five seasonings?Sa from sato (sugar), Shi from shio (salt), Su from su (vinegar), Se from shoyu (soy sauce), and So from miso, attempting at a pun in the Japanese alphabet, as these seasonings are used in Japanese cooking in this order. Introduced in this edition, Tokyo Sashisuseso, is an assortment of seasonings used for representative dishes of Tokyo like sushi, tempura and monjayaki, only with miso replaced with a spicy sauce. The seasonings have been developed by Tokyo’s major seasoning manufacturers over the span of many years, are now being presented in a beautiful, unified packaging design and offered as a gift for the recipient to experience Tokyo’s food culture. Since its launch in 2013, it has been a big hit as a gift that touches the hearts of the Japanese people, and is also highly thought of in Europe as a symbol of Japan’s food culture.

Seasonings do not usually take the center stage on their own as gifts. But truly excellent, tasty seasonings have always been the choice of experts in the culinary world, and their manufacturing technique has also been passed down from generation to generation with great craftsmanship. Even in Tokyo, a city that attracts food ingredients from all over the world and keeps spawning new cuisine, traditional seasonings shine through and are truly deserving of a quality gift status.

Let’s take a look at the depth of Tokyo Sashisuseso and how carefully these five seasonings are crafted. We talked to Kojiro Kurio, the man who commercialized Tokyo Sashisuseso, about each seasoning’s character.

Tamazato sugar is a molasses-containing sugar made using a traditional method. Its name Tamazato (meaning sugar balls) hails from its drying process that yields many sugar balls. Unlike refined sugar, where impurities like vitamins and minerals are removed from the raw sugar through a refining process, the sugar contains many minerals of sugar cane. It also has a refined flavor treasured by high-end Japanese restaurants and other outlets to use as a secret ingredient in simmered dishes.

This is a sun-dried salt that is extremely rare because all its ingredients are from Japan and its production site is also located in Japan. It is very difficult to crystallize salt only with solar and wind power in Japan because Japan is a country with a lot of rainfall and humidity. The salt is painstakingly manufactured a little at a time, taking much time. The coarse salt crystals dissolve slowly and have a mild and deep flavor, making it the salt of choice by professional chefs.

Yokoi Vinegar Brewing is a vinegar manufacturer who supported the development of Edo-style sushi behind the scenes. The traditional Edo-style vinegar Kinsho is made by blending long-matured rice lees vinegar (red vinegar) with vinegar made with domestic rice. It has a perfectly balanced combination of body, good taste and sharpness, and it is highly thought of and trusted by many chefs from top sushi restaurants that have strict standards when it comes to quality vinegar.

This is a dark soy sauce, made by maturing carefully selected whole soybeans grown in Japan, for one whole year in cedar barrels. The amount of brine used to mature the soy sauce is limited to the bare minimum, so that the flavor resulting from this process will be condensed and exquisite. Enjoy the unique body and elegant flavor of the soy sauce, which is often the choice of professional chefs.

“So,” the last letters of the seasoning assortment, is supposed to be from miso but Tokyo Sashisuseso replaced miso with spiced sauce, used for dishes like Tokyo’s famous monjayaki (a type of Japanese savory pancake). More than 30% of ingredients of the sauce is pears and apples grown in the regions along the Chuo Line in Tokyo, providing the additive-free sauce with the natural sweetness of fruit. Poured over deep-fried dishes, it lightens the food’s texture, and used as a hint for cooking, it enhances the cooked food’s richness and deepens its flavor.

Kurio, the man who commercialized Tokyo Sashisuseso, was the second son born to a family of Japanese confectionery manufacturers. As he became more interested in food, he got qualified as a food analyst and vegetable sommelier. Just when he was thinking about what would best describe Edo style flavor, in other words Tokyo’s flavor, he came across a factory in Tokyo producing vinegars and soy sauces using traditional methods. For Kurio, this was the introduction to the world of basic seasonings.

“I want to present these fantastic seasonings which have supported Tokyo’s food for decades as Tokyo’s food culture, and introduce them to a broader world beyond Tokyo,” thought Kurio. He visited factory to factory, with which he fell in love, to persuade them to join in on his idea. Eventually the traditional manufacturers agreed with Kurio. Vinegar, or soy sauce, products have a hard time developing ideas or distribution channels on their own, but when five of them get together they can become a special symbol for “Tokyo’s food culture.”

“Tokyo is a city full of commercial goods that can all serve as gifts. Inside all of this, can we create gifts that reflect Japan’s culture and history? This was what inspired the idea of turning seasonings into a gift.” To make seasonings a gift, the first thing Kurio did was to find the appropriate packaging. He wanted the seasonings’ beautiful colors to be seen through packaging and eventually found the bottles currently being used for packaging.

The next thing he did was to express each seasoning’s quality and tradition with modernized packaging. Yukihiko Aizawa, the designer acquainted with Kurio, identified with and joined the project, and created a logo whose theme is a cherry blossom and a traditional commercial crest. The logo also features both Japanese kanji characters and English, representing the nostalgic atmosphere of past times, and also representing something new at the same time. Each petal of the logo’s cherry blossom features each one of the five basic seasonings, embodying a wish “for the dining table to blossom.” The paper packaging resembles an old wooden box and is designed to be carried in one hand, and handed over as is as a gift. The pack contains an English leaflet for non-Japanese customers who come across the product while visiting Tokyo.

“The ultimate idea of a gift is to make the people who give and receive the gift happy. I hope Tokyo Sashisuseso will be something cherished by everyone for a long time, like cherry blossoms, something that will make people happy,” says Kurio.

Since its launch in 2013, Tokyo Sashisuseso has drawn the attention of many people who love cooking. It has won a variety of awards and its presence is getting stronger. One example is The Wonder 500, a project by the Ministry of Economy, Trade and Industry to widely announce Japan’s excellent regional products overseas. Tokyo Sashisuseso has been chosen as one of the products approved by the project. The product has won many awards in succession, including the golden award (Gold Pentaward) at Pentaward 2014, the global packaging design contest in Belgium, an award at reddot award 2014, the largest design contest in the world hosted by Germany, and a special mention from the juries in the excellent communications design packaging division of German Design Award 2016, the most established design award in Germany.

As Japanese cuisine becomes popular worldwide, perhaps Tokyo Sashisuseso will be a gateway for many people to know more about Japanese seasonings, and attract more people to enjoy cooking Japanese food throughout the world.