TOP > OKURIMONO > MENBEI: A Souvenir from Hakata, Filled with Love for the Local Area
< PACKAGE > 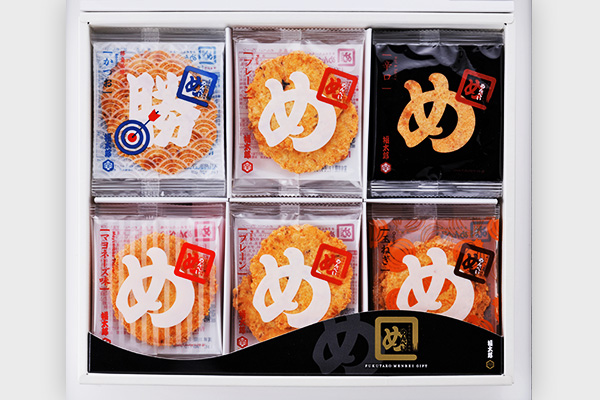 One of the real pleasures of travelling around Japan is sampling the different local specialties and being able to take them back as souvenirs to share with someone close to you makes any trip that much more enjoyable. All of the different regions across Japan have their own local specialties, and today we’re going to be looking at a popular one from Fukuoka Prefecture, home of the “capital of food” itself, Hakata. It’s called “MENBEI,” and it’s a type of senbei cracker made using mentaiko (spicy marinated pollock or cod roe) created by mentaiko manufacturer Yamaguchi Aburaya Fukutaro.

The Fukuoka-based company has made absolutely no compromises when it comes to quality, and MENBEI’s authentic taste sets it apart from the many other “mentaiko flavored” snacks on the market. What’s more, being senbei, they keep for a long time, and are easy to carry or send, making MENBEI perfect for giving as presents.

The editorial team here at SHUN GATE was lucky enough to receive a box of Yamaguchi Aburaya Fukutaro’s “MENBEI” to try. In this article, we give you our impressions of this product, including taste, appearance and other important considerations.

We had the chance to try out the “MENBEI Irodori Gift” set, which out of all the different MENBEI products available, lets you enjoy an especially wide range of different flavors. As soon as you open the package, the aroma of mentaiko wafts out to greet you. On the first bite, the flavor is light, but the aftertaste is spicy and flavorsome, making these a great accompaniment for beer. With their crispy, slightly hard texture, these are very addictive senbei. As well as the standard mentaiko flavor, there’s a varied selection of other different flavors included, all created with their affinity with mentaiko in mind mayonnaise flavor, asari (Manila clam) and nori flavor, and more. Once you eat one, you’ll find yourself reaching for the next flavor, and then the next!

How MENBEI were born: Bringing mentaiko to as many people as possible

We spoke with Katsuko Yamaguchi, senior managing director at Yamaguchi Aburaya Fukutaro and the creator of what is now one of Fukuoka’s most famous souvenir products MENBEI.
“In 1975, when the Sanyo Shinkansen was extended to Hakata Station, it became possible for us to introduce mentaiko one of Hakata’s local specialties to people from across the country. Times have changed since then: mentaiko is available in department stores in Tokyo and all the other large cities, and recent consumer trends for products with lower salt content have led to shorter shelf lives. Given these factors, we foresaw the gradual decline in purchases of raw mentaiko, a perishable food product, as souvenirs from Hakata.”

So began Yamaguchi’s mission to create a snack product that would serve as an ideal souvenir and help as many people as possible to enjoy the taste of mentaiko.
“We were trying something new, so even after we settled on making senbei, there was still a long trial and error process. At first, we tried using wheat-based dough, but we weren’t satisfied with the taste. So, we did some research on different senbei from across the country, and eventually settled on using starch-based dough, like a type of senbei from Nagoya. Also, because we were after not only just the right taste but also the right appearance, we spent a lot of time adjusting the amount of squid, octopus, and other ingredients used.”
Yamaguchi’s desire to create good-tasting senbei that accentuate the natural flavor of mentaiko is what led to the creation of MENBEI.

According to Yamaguchi, her idea to combine mentaiko and senbei was inspired by the merchant mindset found in Hakata, Fukuoka.
“Hakata in Fukuoka has been a merchant town ever since the Edo period. The merchants here in Fukuoka are open and unguarded, and they work diligently, competing with each other as they go. If one merchant has a good idea, the others copy it. Then, that merchant comes up with a new idea. I think that it’s definitely this friendly competition between the merchants of Hakata that has made Fukuoka’s food culture as rich as it is.”

Yamaguchi says that this same mindset lives on in Yamaguchi Aburaya Fukutaro. “Like the name ‘Aburaya’ (oil merchant) suggests, when our company was founded, we were in the business of manufacturing cooking oil. We were later able to branch out into food wholesale and mentaiko production because we stayed ahead of the competition by continuing to move into new ventures, which is all down to our underlying merchant mindset. Nevertheless, we still sometimes worry that others are working harder than us. That’s probably what’s kept us motivated to continue on trying new things for all these years.”
It was undoubtedly Yamaguchi Aburaya Fukutaro’s being based in Hakata, Fukuoka, amid an environment of friendly competition, that enabled them to develop MENBEI, now one of the most famous souvenir products in Fukuoka Prefecture.

Next, we visited the factory in Soeda-machi where MENBEI are created. In order to get MENBEI exactly the way Yamaguchi envisioned, their production process also went through a repeated cycle of trial and error. We spoke to managing director Takashi Urata, who has been involved in MENBEI production since it first began.
“When we decided to produce MENBEI by ourselves, it was something we’d never done before, and we had no idea what sort of equipment we’d need. So, we went to study other senbei manufacturers so as to learn about the production process. In particular, we researched how to accentuate the mentaiko flavor when creating the dough, and eventually we arrived at our current method.”

The MENBEI dough is made from a base of starch together with mentaiko, squid, and other seafood. Rather than being made into a paste, it is kept slightly powdery, and a certain variation between the sizes of each of the senbei is kept deliberately.
“On the box it says ‘traditional production methods,’ and although we use machinery, by deliberately not making each senbei the same, we give each one a unique texture and flavor, which adds to their charm. What’s more, although some other snacks use various powders and extracts to give them a seafood taste, MENBEI’s flavorsome taste is created by using actual seafood in the dough,” says Urata.
MENBEI can break easily during production, making this process somewhat inefficient, but apparently, continuing with the current method is the only way to create such delicious senbei.

Contributing to local areas as a local manufacturer based in Fukuoka

MENBEI are also playing an important role in regional revitalization. The factory that we visited in Soeda-machi was reconstructed from an abandoned school building. Not only has a vacant building been put to use, but the factory has also created jobs in the area, and by holding factory tours it is playing a part in attracting tourists.

Yamaguchi Aburaya Fukutaro’s contributions to the local area aren’t limited to the factory in Soeda-machi. At their main mentaiko factory in Fukuoka-shi, they have built a large parking lot that can accommodate tour buses and the like, in order to encourage factory tours. At the end of these tours, a food-sampling session is held where it’s possible to eat white rice with colored or non-colored mentaiko.
What’s more, the starch used to create the MENBEI dough comes from Koshimizu-cho in Hokkaido, where Yamaguchi Aburaya Fukutaro set up a factory using an abandoned school building, like their factory in Soeda-machi. Rather than simply buying in their ingredients, they have again implemented a system that contributes to the local area.

Yamaguchi Aburaya Fukutaro place great importance on the gratitude they feel towards their home of Fukuoka, the area that made them who they are, and the people who eat their products. Now one of the most famous souvenir products in the region, each box of MENBEI is filled with this gratitude. Why not choose some to send as a gift?

Hakata Station is a popular terminal in Kyushu, served by the Shinkansen as well as bus routes to destinations across Kyushu. Inside this bustling station is a shopping complex known as Deitos that is also home to a Yamaguchi Aburaya Fukutaro store.
The store is the perfect place to pick up souvenirs. As well as of course MENBEI, there’s a range of other products available, such as the stylish “THE MENTAI” series of bottled mentaiko, which can only be purchased at the Deitos store.
There’s also a cafe inside where you can get your fill of mentaiko with the “Mentai Bowl” and “Hakata Cha-zuke Zen” set meals. The next time you’re in the area on vacation or for business, we’d highly recommend that you stop by for a taste of Hakata before you leave.