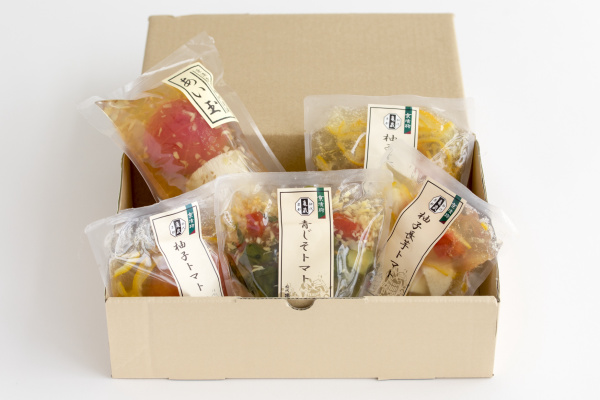 Kyoto’s Shodai Kamekura was established in 2007, and has become popular for its creative Japanese tsukemono (pickles) using unconventional ingredients such as tomatoes and yuzu citrus fruits. For this article, we will introduce the Kyoto Tsukemono I-dama Limited Set, full of the Shodai Kamekura charm and perfect for a gift.

Here are some reasons why Shodai Kamekura’s Kyoto Tsukemono I-dama Limited Set is recommended as a gift.

The shop focuses on using 100% domestically-made ingredients, and vegetables are also mainly procured from contracted farmers in the local Kyoto area. The shop has a complete understanding of fertilizers and pesticides used, along with agricultural techniques for the tastiest vegetables, whereby maintaining a high level of quality for their products. The tsukemono shop also insists on being additive-free, with no chemical seasonings. Vegetables are pickled to have a mild taste using only natural ingredients, bringing out the flavor of the vegetables without any unwanted aftertaste.

Creative tsukemono that does away with stereotypes

The shop’s tomato gelée tsukemono has become synonymous with their name. It is a gift perfect for hot weather, featuring cool, refreshing, fruity and sweet/sour flavors. This innovative idea has done away with all preconceptions of traditional Kyoto tsukemono, surprising recipients and introducing new ways of enjoying tsukemono.

Many tsukemono products with subdued salt flavors have a shorter shelf life than usual, making it difficult to offer as gifts. After noting that customers wished for a longer shelf life, Shodai Kamekura incorporated stand packs with excellent storage properties and heat treated their products. By doing so, some products (such as the Yuzu/Tomato) have a shelf life of 50 days. (30 days for their Yuzu/Yam/Tomato product, and eight days for their I-dama and Green perilla/Tomato products)

A traditional Kyoto tsukemono shop Starting over after facing hardships

It was not always smooth sailing for Shodai Kamekura, which celebrates its 13th anniversary in 2020.

The shop was founded in 2007, after a 200-year old Kyoto tsukemono shop went bankrupt. The shop’s trademark was sold to another company, and all staff faced unemployment. In this situation, five tsukemono artisans and five part-time workers created a new company only one month after the bankruptcy. This was the start of Shodai Kamekura.

“When we were starting out, I had to prepare tsukemono in rubber boots and work clothes, but I also had to make the rounds as the company president, so there was no time to rest at all. I had to scramble and purchase a suit, but forgot all about shoes and set out wearing rubber boots. I had to buy leather shoes on the go. I made the rounds to many companies, driving about 300 to 500 kilometers a day. I believe this was possible only because I was young and brash at the time,” says the President and Representative Director of Kamekura Ltd. (Shodai Kamekura), Takashi Nishimura.

Nishimura continued to sell the products at the company’s direct sales shops and online while negotiating with companies that they had been doing business with before the bankruptcy. As a result, their business was able to continue on, and the company was able to distribute their goods.

The shop also offers tsukemono almost like dessert, with sweet/sour gelée and tomatoes, or tsukemono similar to Western pickles using ingredients such as pumpkin or corn. The store was featured in the media in the past as well when they released strawberry tsukemono.

The origins of their creative tsukemono products was the words a former proprietress said to Nishimura when he was in training at a Kyoto tsukemono shop—“Do what makes customers happy.”

“Distributors sometimes request creative tsukemono products, but ideas for products are usually born by accident, such as ingredients that happen to be next to the cutting board at the time, when shopping or taking walks in fields, when busy or when something did not go right,” says Nishimura.

The tomato tsukemono is one of the most famous creative tsukemono released by Shodai Kamekura. This product was created from a failure that happened many years ago.

One day when Nishimura was training as a tsukemono artisan, he dropped a skinned tomato that was to be used for side dishes into liquid pickle seasoning. The tomato stayed there for a night, and Nishimura ate it the next day to do away with all evidence of his mistake. However, the tomato was surprisingly good, which triggered the idea for the product.

Nishimura, who dislikes raw vegetables, said that it was the first time he thought tomatoes were delicious. A pickled tomato has less bitterness and acidity, with a mellow and enhanced flavor due to kelp soup stock.

With this experience and the words from the proprietress in mind, he went on to discover new horizons without fearing failure and giving up, to make customers happy. This is the belief of Shodai Kamekura.

Here are the four types of Kyoto Tsukemono I-dama Limited Sets, which are full of the unique tsukemono from Shodai Kamekura.

One very sweet and large tomato is pickled along with a thick yam. The minced ginger within the sweet/sour gelée create a refreshing dish. This product has a shelf life of eight days.

Cucumber, cherry tomatoes, green perilla and minced ginger are pickled in gelée. It offers a refreshing taste perfect for summer, and using it to top chilled tofu or pasta is highly recommended. This product has a shelf life of eight days.

A highly fragrant product with bite-sized yams, cherry tomatoes and yuzu peel in thick slices. The citrus taste of yuzu is almost like a dessert, making this product very popular among female customers. This product has a shelf life of 30 days.

This product represents summer for the shop. The mild fragrance from sliced yuzu, the tomato’s flavor, and sweet/sour gelée make it a delight to eat. Freezing the product and eating it like a sherbet is also recommended. This product has a shelf life of 50 days.

Exploring new challenges while holding on to tradition

The tomato tsukemono, which was created from an accident, has now become synonymous with the Shodai Kamekura name, and is now known across Japan. The company has started spot sales in Los Angeles and Honolulu in 2019, and hopes to conduct manufacturing and sales locally, along with creating tsukemono and everyday dishes with locally-grown vegetables in the future.

“During my time as an artisan at a 200-year old Kyoto tsukemono shop, we would salt vegetables and put weights on them as a way to create preserved food. The technique I learned then will continue to be cherished and used. As more consumers have less interest in tsukemono, we will continue to create creative tsukemono products to capture their interest. I hope everyone will feel free to try some,” says Nishimura.

The young proprietor of a tsukemono shop, which was reborn from the ashes, continues to harbor tradition while bravely challenging conventional ideas, going mightily forth, creating novel products. How about selecting these creative tsukemono as a gift, while looking forward to the next new creation?