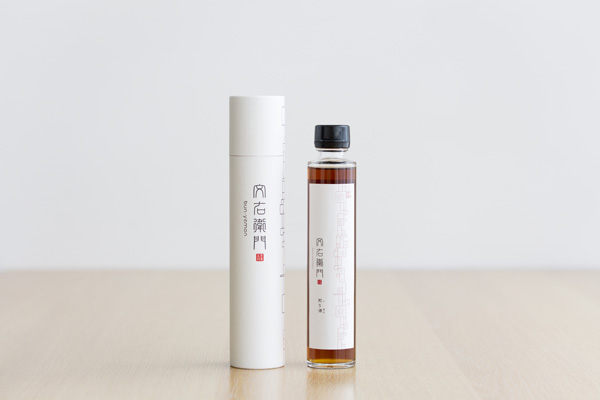 ＊Package shape varies according to price.

If special ingredients like seasonal vegetables and seafood are at hand, it is a good idea to use special seasonings so they can be as even tastier. We would like to recommend you one such seasoning: Irizake (Japanese word meaning roast sake, hereafter “roast sake”) from Bunyemongura.

Roast sake was the seasoning that supported the diet of commoners until the mid-Edo Period when soy sauce was not widely available. Made by adding pickled plums and bonito flakes to sake and cooking the mixture until it is reduced, roast sake has a gentle and refined taste that is perfect for cooking and that brings out the original flavor of the ingredients. It also makes a great gift for gourmets and people who enjoy cooking.

A perfect gift for gourmets: a Japanese flavor known only to a special few

Roast sake is not a familiar seasoning in today’s households, but chefs of Japanese cuisine still cherish it today to prepare ingredients that do not have a pronounced flavor or color. Bunyemongura’s roast sake was created to help anyone to achieve such Japanese flavors at home. Used as a gift, it is sure to please anyone who is particular about food.

Bunyemongura’s roast sake is made entirely with carefully selected Japanese ingredients. The dashi (Japanese soup broth) which forms the basis of the sake’s flavor, is made with authentic bonito flakes from Makurazaki, Kagoshima, Ma-Kombu (Japanese kelp) from southern Hokkaido, and shiitake mushrooms grown on logs in Kyushu. Pickled plums from Gunma add a hint of sourness. The roast sake also features red vinegar from an old and esteemed brewery in Tokyo, which is responsible for the body of the sake. Each ingredient carries the makers’ techniques and passion that you will want to talk about when you give someone the roast sake as a gift.

Shoda Shoyu is an esteemed soy sauce maker from Tatebayashi City, Gunma, with over140 years of history. Bunyemongura is their brand, which they launched in 2012 and which takes its name from the founder Bunyemon Shoda III. We interviewed Masao Yoshikawa, the man who has been involved in Bunyemongura since its launch.

One of the products the company developed in this way was its roast sake, which had a traditional flavor passed on from the Edo Period. Roast sake is made primarily with sake, pickled plums and dashi. The final flavor depends on which of these ingredients is most pronounced. Bunyemongura focused especially on the dashi, paying so much attention to detail that, with regard to the fish flakes for the dashi for example, they only use honkarebushi (authentic bonito flakes) made from bonitos pole-fished in the seas around Japan. Yoshikawa told us why this was the case.

“When you catch bonitos by round haul netting, their body is wrapped tight and that crushes their body cells. We only use bonitos from the seas around Japan because they are only frozen for a short time compared to the bonitos that come from afar. In fact, I have tasted both of them. When you make bonito flakes from them, they really taste different. Also, authentic bonito flakes are processed with mold on the surface but if you use them directly, you will get a slightly moldy smell. So, we shave off the surface just like the rice you use for sake brewing, using only the middle part. We went that far because we wanted to give a clearer taste to the roast sake.”

Bunyemongura’s roast sake also contains vinegar, which was not used in roast sake during the Edo Period. According to Yoshikawa, this is an arrangement to fit modern times to make it a lasting product, rather than just a copy of the traditional flavor. The company uses red vinegar from Yokoi Vinegar Brewing, the only vinegar brewery in Tokyo.

“Yokoi Vinegar’s red vinegar is the traditional vinegar that many sushi restaurants in Tokyo use. It is unusual in that it is made from sake lees for pure rice sake. Fermented over five to six years, it becomes almost black, rather than red. It is really amazing. Even if you drink it neat it goes down smoothly, as it is very mild. The body and great flavor of this red vinegar accentuates our roast sake.”

Yoshikawa said that every ingredient in the roast sake carries stories. He often visits producers and processers, and each time he learns about their techniques and passion, and as this knowledge gets deeper, it makes him strongly want to pass on that rich food culture to the future, he said.

Pointing to the paper cylinder that encases the roast sake, Yoshikawa said, “This slim and long case looks like a baton, doesn’t it?” He wants to relay the wonders of Japan’s food culture from person to person, and to the future. This baton-shaped packaging makes it convenient to handle the roast sake over as a gift, encasing this passion from Bunyemongura.

When we open the cap of the roast sake, we get a soft whiff that courses through the nose. According to Yoshikawa, it is the smell of fermented rice that is characteristic of sake.

“If you pickle thin cucumber slices in the roast sake for about 30 minutes, they will taste very mature, just like traditional rice bran vegetable pickles. Maybe there is something in common between sake and the rice bran pickle because they are both fermented foods that involve rice.”

Not just cucumbers. Roast sake is great with other foods like white fish sashimi and tofu. It is a multi-purpose seasoning that can be used for stir-fries and stews. We asked Yoshikawa for his recommendations for using the roast sake.

“I personally like to use it simply for rice topped with a cracked raw egg. You can also easily prepare delicious baby tomato pickles with it. Just use a toothpick to make a hole in the tomato, put it in the roast sake and cool it in your fridge. It will be even tastier if you put a little bit of perilla leaves on top when you serve it. Oh, also, you can make flavored rice too. The rice will have a pronounced dashi taste and the sour pickled plum flavor also helps you enjoy the rice in summer, when we don’t have that much appetite. You can also sprinkle chopped Japanese ginger and white sesame on top. It will smell nice and will be a nice way to finish your meal after you have enjoyed a few drinks.”

Light and refined, roast sake is almost a manifestation of the style that was favored by people of the Edo Period, enhancing the flavor of seasonal ingredients. Why not use the roast sake as a gift that carries Bunyemongura’s passion for the future?