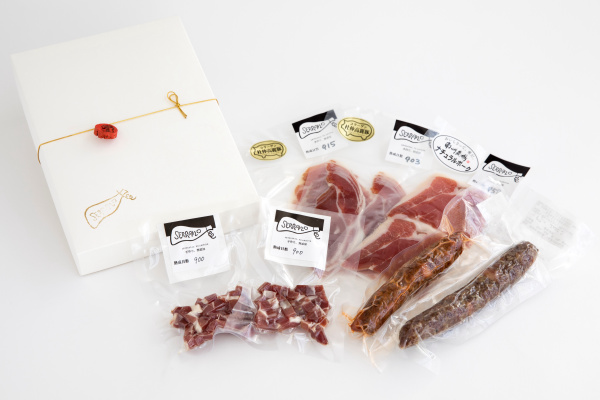 Serrano manufacturers additive-free and synthetic seasoning-free dry-cured ham in Sakado, Saitama Prefecture. For this article, we will introduce the Serrano Standard Set as a gift, which offers various flavors to sample.

Here are some reasons why Serrano’s “Serrano Standard Set” is recommended as a gift.

Continuing on with traditional methods, with the help of nature

Serrano’s dry-cured ham is created by immersing pork ham into saltwater and slowly drying it afterwards—an extremely simple and traditional method. Their ham does not contain any additives or synthetic seasonings, and no bacteria is intentionally added to the products. Serrano carefully regulates temperatures and humidity to allow their products to slowly and naturally age over two to three years.

Serrano’s packaging features a cozy box made from soft-textured paper, with a red cork over the box. The cork is made from refuse materials, with each one carefully sanded and painted by hand. Serrano takes a natural approach when manufacturing dry-cured ham, and also focuses on eco-friendly packaging as well.

Hiroshi Ojima, the founder of Serrano, discovered the wonders of dry-cured ham while studying abroad in Spain.

“I was blown away by the dry-cured ham I tried when visiting Spain’s Jabugo, which is famous for its ham,” says Ojima. He said that he visited many bars to sample many types of dry-cured ham. After returning to Japan, he started creating his own dry-cured ham in a shed at his own home, hoping to make some appetizers to have when drinking.

As Ojima originally had a great interest in food, his goal was to create dry-cured ham without any additives or synthetic seasonings. Unlike Spain, which has a drier climate, making ham in Japan—with its high humidity and frequent rainfall—was not an easy feat. When he finally succeeded in making dry-cured ham, he invited his Spanish friends to a sampling party, to see how authentic Spaniards would react to his ham.

“My friends worked in foreign embassies and in finance. They talked about my dry-cured ham at the Spanish restaurants they frequented. This turned out to be my lucky break, as more and more chefs started to ask me for my ham for their restaurants. It was then I decided to produce dry-cured ham in earnest,” says Ojima.

Although Ojima started receiving many orders from restaurants, he refused to automate his process for bulk production. He explained his reasons for this.

“Using machines for bulk production will always result in using something unnatural, such as additives and synthetic seasonings. This will certainly have an impact on the taste as well. Although I am going against social trends, my goal is to prioritize taste above everything else, and will refuse to automate any processes.”

Dry-cured ham handed down within the family

Currently, Ojima is producing ham with his two daughters. His older daughter, Rika, explained to us why she started to make ham with her father.

“Although my father had been making dry-cured ham for over 40 years, his health is not what it used to be, and he was forced to reduce the number of orders he could take. I know how good my father’s ham is better than anybody, so I could not just stand there and let it fade away. That is why I decided to make ham with him.”

It has been three years since the three started making ham together. Now, they say that the three of them may burst into heated discussions on how to create delicious dry-cured ham.

“We now manage temperature control using data. Because my father has expert instincts developed over long years of ham-making, he may not be fully on board with data-taking. However, I believe this is a necessary step to ensure that my father’s dry-cured ham carries on,” says the younger daughter, Emi.

The wish of this father-daughter team is to deliver delicious dry-cured ham. This is the driving force of Serrano’s ham production.

What is special about the Serrano Standard Set, and recommended ways to enjoy it

The Serrano Standard Set allows sampling of various Serrano hams. The family showed us the recommended ways of enjoying their ham products, which we will introduce here.

Rich-flavored, dry-cured ham aged for 700 to more than 900 days, is thinly sliced to allow people to enjoy the original taste to the fullest.

Naturally, this ham goes perfectly with wine, but it also is paired wonderfully with other types of alcohol such as sake, shochu spirits and whiskey, along with food such as vegetables, fruits and nuts. Rika recommends tossing this dry-cured ham with strawberries and cream cheese, dressed with balsamic vinegar.

This offers a different and more straightforward way of enjoying dry-cured ham by changing how it is prepared. The type of ham used is the same, but the saltiness of the meat is more powerful than when it is sliced.

Although this can be used as an appetizer on its own, Emi recommends dicing it even smaller to use it as a topping for cream-sauce pasta. She also says that putting this ham in hot oil to season it, and using it as a dressing is also delicious, as its saltiness packs a punch.

Despite its red coloring, chorizo sausages have a mild spiciness, and the rich flavor of four paprika variations are a delight for taste buds.Salchichón sausages use beef in addition to pork, seasoned with pepper cut into eight parts. Its aroma can be enjoyed each time it is chewed, and a savory taste comes from its melting fattiness.

Both feature dry-cured ham mixed in in place of salt, and homegrown herbs made by Ojima’s wife.

It is recommended that these sausages be served without heat, but chorizos are also recommended for bean soup such as the French cassoulet soup, and the Salchichón is perfect for canapes with butter-sautéed apples.

Although we were taught various ways to enjoy the products, both daughters laughed and said that, “Enjoying it any way you want is the best way.” How about discussing fun ways to eat these ham products the next time you gather with family or friends?