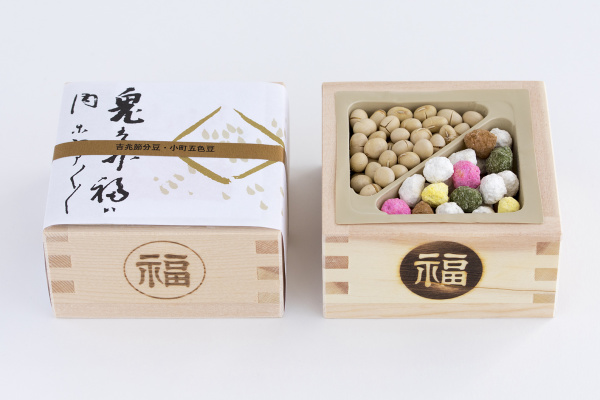 Mametomi Honpo specializes in bean snacks with special care toward ingredients and manufacturing, selling only bean snacks in Kyoto for more than 110 years. In this article, we introduce the Assorted Setsubun/Goshikimame Beans as a gift, selected from the colorful array of Setsubun beans sold at Mametomi Honpo.

Only domestic, specially prepared beans of the highest quality

Setsubun (bean-throwing festival for the traditional end of winter) beans are manufactured from Tsurunoko soybeans from Hokkaido’s Donan area. Of this, only new, extra-large nibuhachirin (approximately 0.84 cm) or larger beans from the highest quality Tsurumusume brand are used. These beans are slowly roasted in the traditional way to become plump, glossy and soft to the core, with a special sweetness.

The famous Kyoto sweet Goshikimame (five-colored beans) is a bean snack that represents Kyoto, with four colors representing north, south, east and west Kyoto, along with the color purple for the Shishinden (main hall of the Imperial Palace). This colorful snack was created for good luck and is perfect for gifts.

With a branded Fuku character for good luck on the wooden box, the packaging matches the Setsubun occasion where wishes are made for the year’s peace and happiness. It can also be used to enjoy sake after the Setsubun beans have been thrown.

The Setsubun festival prays for the year’s peace and happiness

Setsubun is a day that is the turning point of seasons, just like Rikka (the first day of summer) or Risshu (the first day of autumn). However, it established itself as the “day before Risshun (the first day of spring)” which falls on February 3. In the past, when the traditional lunar calendar was used, Setsubun was the eve of Risshun and was celebrated in a way that is similar to how we celebrate New Year’s Eve in modern day. For this reason, Setsubun sees many events that celebrate the beginning of the year and prays for peace throughout the year.

There were many customs born throughout Japan for Setsubun, such as lining twelve beans for each month at the fireside on the evening of Setsubun to predict the weather of each month by how the beans were charred, or eating the same amount of beans as one’s age to ward away evil, or to place pickled plums and beans into tea to drink as a lucky tea.

The custom of throwing beans to ward off evil is an ancient Chinese custom that came over to Japan and is said to have spread among commoners during the Edo period (1603–1868). These Edo Setsubun customs can be seen in the “Japanese Customs Pictorial” scripted in the Taisho period (1912–1926). It was considered bad luck to have any beans sprouting after they were thrown, so only roasted beans were used. In this way, the Setsubun festival and roasted beans have been inseparable from the past.

Mametomi Honpo was established in 1908 as a roasted bean business and has handled only beans for more than 110 years.

The shop focuses especially on selecting ingredients, under their policy of “good quality ingredients come first and adding a good manufacturing method creates first-class products.” The shop ascertains characteristics of beans and orders selected ingredients from various areas to match each type of bean.

The Assorted Setsubun/Goshikimame Beans mentioned here is a set that offers roasted beans for Setsubun along with five-colored beans unique to Kyoto.

“The Taisho Emperor ascended to the throne a few years after this store was founded, and many people traveled to Kyoto to celebrate. It was during this time Goshikimame was born and established itself as a souvenir unique to Kyoto,” explains Yasunori Tominaga, the fourth-generation head of business.

This auspicious set features Setsubun beans that ward off evil and wish for a peaceful year, along with Goshikimame born for celebration.

Manufacturing methods that show no compromise, with carefully selected ingredients for a first-class product

The Setsubun beans of Mametomi Honpo are manufactured in two traditional ways. One method does not immerse beans in water for softening, but splashes water on the beans repeatedly across four days. This water-splashing method retains sweetness while slowly softening the beans. Another method is the direct-grilling method in which the beans are slowly roasted over very low heat for a long period of time.

In recent years, a large number of beans roasted quickly using the hot air roasting method are commonly seen on the market. However, this method takes away too much moisture, resulting in beans with brittle, cracked hulls and no sweet taste. The two methods Mametomi Honpo uses are tedious but create Setsubun beans that are browned to the core with a lingering sweetness. Seasoned craftsmen expertly roast the beans while checking humidity and bean conditions.

The five colors of the famous Kyoto Goshikimame model themselves after the town of Kyoto. The beans feature four colors of north, south, east and west based on the ideal topography for the gods of each direction—the azure dragon (blue), white tiger (white), vermillion bird (red), and black tortoise (black)—along with a purple color representing the Shishinden (main hall of the Imperial Palace) situated in the center of Kyoto. When using these colors for sweets, including Goshikimame, yellow is used in place of black, and brown is used in place of purple.

Carefully selected green peas from England or New Zealand are used for Goshikimame. As with the soybeans, craftsmen take several days to painstakingly splash water morning and night, to slowly soften the green peas. Next, the beans are roasted in a unique way so that all beans are softened before sprinkling well-refined sugar on them across a few days. To finish, cinnamon from Vietnam (brown), green laver from Tokushima (green) are directly sprinkled on the beans before red, yellow and white coloring is added to create five colors. The entire process takes approximately from one week to ten days from splashing, roasting to sugaring.

In addition to Setsubun/Goshikimame beans in wooden boxes, Mametomi Honpo also has a diverse lineup of Setsubun products that appeal to both children and adults. There is a wide array of products lining their shelves, with fun packages featuring bean snacks, rice crackers and candies with a focus on roasted beans.

Of these products, the most popular features a few Setsubun beans enclosed in a small cone-shaped pouch.

“When we surveyed young mothers almost 25 years ago, there were opinions that ‘children eating beans after they have been thrown is not sanitary’ and ‘cleaning up the beans afterwards is a nightmare.’ So, we packaged some beans in a small cone-shaped pouch so that it rolls easily when thrown. This turned out to be very popular and has been our top-selling product ever since it was launched. This probably wouldn’t have been popular if it was sold in days of old, but I believe it is perfect for the world we live in now,” says Tominaga.

He notes that the endearing illustration of the ogre was drawn by a monk he knew.

Mametomi Honpo wants to continue creating special products like this to bring in business from younger generations. There is no doubt that their evolution of traditional sweets according to the changing times will be under the spotlight.

The custom of throwing beans on Setsubun was an event to ward off evil during New Year’s Eve on the traditional lunar calendar. Although the times have changed, the sentiment of wishing well for people at the start of a season has not. How about planning an event to wish the happiness for your loved ones and the start of a new year with Setsubun beans from Mametomi Honpo?