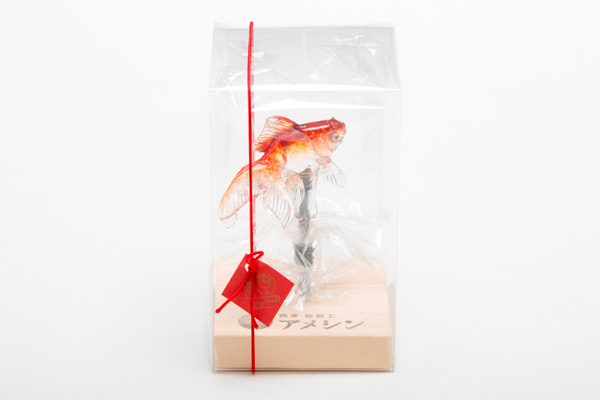 Amezaiku is the name given to a traditional form of confectionary produced in Japan. There are many theories about the origins of amezaiku. It is generally thought to have crossed to Japan from mainland China at some point during the Nara or Heian periods. At the time, amezaiku confectionery was very much a luxury item, and the primary aim was to produce aesthetically pleasing pieces with exquisite and intricate patterns.

Ameshin, a confectioner based in Tokyo’s Asakusa district, is committed to maintaining the amezaiku tradition while at the same time exploring new directions for this unique delicacy.

The goldfish amezaiku, Ameshin’s flagship product, is a sight to behold. At first glance it is virtually indistinguishable from the real thing?so much so that you almost expect it to start swimming around in lazy circles.

A gift from Ameshin provides as much joy to the giver as it does to the recipient!

Here are two reasons why an Ameshin product makes a great gift.

The primary appeal of amezaiku from Ameshin is surely the exceptional artistic talent on display. The pieces appear exquisitely crafted from every angle and feature striking colors with subtle yet intricate patterns of light and shade. Each one is a masterpiece of perfection, produced by master craftsmen at the top of their game.

Pieces made to order

Ameshin offers a unique service: they will make you any amezaiku piece you like. Popular choices are animals and flowers, but Ameshin can produce whatever you desire. What an inspired gift idea for that special someone!

Ameshin was founded in 2013 in Asakusa, and opened a second shop at Solamachi (also known as Tokyo Skytree Town) in 2015. Despite being in existence for only a handful of years, Ameshin has already established a strong reputation as a revolutionary practitioner of the art of amezaiku. In doing so, it has breathed new life into this ancient traditional cultural confectionery-making technique.

Master craftsman Shinri Tezuka is the driving force behind the Ameshin phenomenon. He gives regular demonstrations of amezaiku at the Solamachi store. We started by asking Tezuka to tell us about the inherent appeal of amezaiku confectionery.

“Confectionery hardens very quickly as it cools,” he explains. “You really only have about two or three minutes to get it into the shape you want. In that sense, amezaiku can be considered very much governed by the skills of the craftsman. And I think that’s part of its appeal.”

Tezuka continues working throughout our conversation, scooping pieces of hot candy (at around 90°C) from the pan and rounding them out before attaching them to the tip of a rod and deftly crafting a variety of shapes with the help of a pair of scissors.

Tezuka says he has been fascinated since childhood in the idea of making things and in particular the traditional artisan techniques of yesteryear. Prior to starting Ameshin he used to make fireworks! But whereas fireworks are created through complex combinations of materials and tools, amezaiku is a pure and simple art. In this sense, it is entirely dependent on the competency of the confectioner. It is the ultimate form of handiwork, in that there is nowhere to hide if your skills are not up to it.

Tezuka was prompted to launch Ameshin out of concern that the ancient traditional cultural art of amezaiku might be lost forever, given the ongoing decline in the number of practicing amezaiku confectioners. Incredibly, given his level of expertise, Tezuka has never received any instruction in the art and is entirely self-taught.

Though amezaiku is commonly associated with exaggerated versions of animals and other popular motifs (known as deforme), Tezuka prefers to create pieces that are as realistic as possible (verite).

“For me, the ultimate objective is to develop your technique to the point where you can produce absolutely anything,” he explains. “Amezaiku in particular is a race against time, and if you limit yourself to deforme shapes then you’re never going to challenge yourself and explore new areas. Take the goldfish, for instance?it’s still a work in progress as far as I’m concerned. I am still looking at ways to hone my skills and make it better.”

Amezaiku from Ameshin are an embodiment of craftsmanship and as such are highly sought after as gifts and souvenirs.

According to Tezuka, the true meaning of a gift is not so much the physical gift as the story behind it.

“In the modern world we have access to so many things,” he says. “But I think what people are looking for more than ever is an underlying storyline: the history behind the gift, how it was made, the purchaser’s motivation, and so on. Amezaiku can be made to any shape you like, so it makes the perfect gift because you can fashion your own story around the gift.”

Every gift-giver has their own story, and Tezuka sees it as his job to bring each of those stories to life. These unique gifts will bring joy and delight to all those who receive them. So if you’re searching for an unusual or special gift, an amezaiku masterpiece from Ameshin could be just the thing.

＊Opening hours for both stores are shown on the website.

＊The Asakusa workshop is used for amezaiku-making classes (bookings essential). Please note that products are not available for sale, and public demonstrations are not provided.