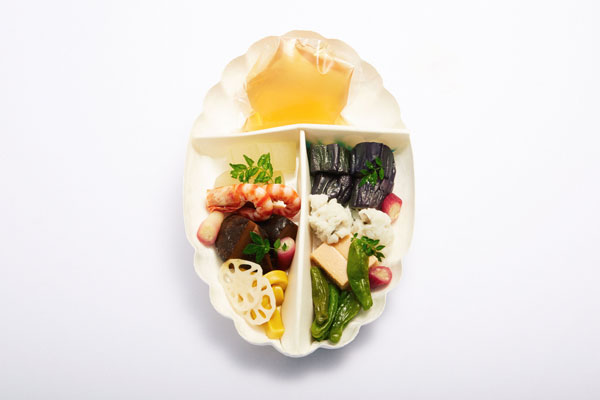 Summers in Japan are hot and humid with scorching sunlight. A light and refreshing meal is just the thing when temperatures rise.
The luxurious Kyo-no-Himetsuto series makes the perfect summer gift. As refreshing as they look, they are delivered from Wakuden, the long-established Japanese restaurant. “Kyo-no-Himetsuto: Summer vegetables and colorful hors d’oeuvres” offer Japanese restaurant flavors and make ideal gifts for friends and family.

Wakuden’s Kyo-no-Himetsuto series are boxed meal sets that have been prepared with care and are packed with seasonal flavors that can only be found and enjoyed for just a short period. The menu changes monthly.
This summer, a new item has been included in Kyo-no-Himetsuto boxes: pike conger, known in Kyoto as “the flavor of summer,” packed together with summer vegetables, such as long eggplant and white gourd melon, and topped with specially made cold gelee, which offers a pleasantly cooling sensation.

Why not give these refreshingly flavored Japanese restaurant delicacies featured carefully prepared seasonal food, as a gift to someone special?

The editorial team here at SHUN GATE was lucky enough to receive Wakuden’s “Kyo-no-Himetsuto: Summer vegetable and colorful hors d’oeuvre” to try. In this article, we give you our impressions of this product, including taste, appearance and other important considerations.

Coolness and delicacy of summer vegetables and pike conger

The boxed meal had a decorous appearance of something served by a venerable restaurant, heightening our expectations. The paper box container was so daintily shaped, like a flattened cocoon that it could be placed straight onto the dining table.

The Japanese character that reads “tsuto” that makes up part of the word “Himetsuto” comes from the woven straw used to pack food in. It later came to mean to “wrapping a treasured gift.”

I took a bite and the aroma of bonito of gelee spread in my mouth, followed by the crisp texture of fresh vegetables. And more than anything, the rich flavor of pike conger was exquisite. The perfect amount of oiliness, wonderful texture and refined sweetness sharpened my appetite.
Being called the summer flavor of Kyoto, the crispy light white pike conger meat even looks refreshing. We were able to thoroughly enjoy to our heart’s content an ensemble of ingredients that are in season from the early to late summer.

Wakuden was established as a Japanese inn in Kyotango, Kyoto in 1870. In 1982, the Japanese restaurant Kodaiji Wakuden opened. Since then, the restaurant has been pursuing not traditional decorative Japanese courses, but has focused more on serving seasonal ingredients that are prepared to bring out the best of their flavor.

According to the shop’s staff, the take-home menu delivers seasonal ingredients cooked in line with the spirit of Wakuden.

“The truly wonderful taste of the seasonal ingredients can only be enjoyed during a short period. We offer take-home boxed meals containing a mixture of ingredients from early to late in the season and which are blessings from the ocean and the mountains. The content of these meals changes every month.”

The restaurant uses only select pike conger, the main ingredient. The pike conger used is from Awaji Island, whose coast has a fast moving tidal current due to its unique topography. This prevents the water near the ocean bed where pike conger lives from stagnating thanks to a constantly supply of fresh seawater. This results in a rich supply of the food that the pike conger feeds on, which helps the eel thrive, producing a delicious light white flesh with a truly deep and refined flavor.

When this highest grade pike conger comes into season, Wakuden delivers its wonderful seasonal flavor prepared so as to not compromise its freshness.

Summer gifts created through a time-honored Kyoto restaurant’s pursuit of flavorful summer ingredients.
Use your five senses to enjoy the luxurious moments of coolness to forget the summer.

Wakuden offers a summer gift package set featuring pike conger shabu-shabu, allowing recipients of these gifts to delight in piker conger’s seasonal flavor.
Pike conger meat, finely sliced so as cut up the small bones it contains, is dipped in pike conger soup and garnished with wasabi (Japanese horseradish) and pickled plum. This is a perfect meal to entertain your guests with.

“We select the freshest and fattest pike conger and carefully pack it to maintain its freshness and ensure that it is shipped in the best possible condition. That is the most important point. Pike conger tends to dry out as it is placed on a bamboo sieve basket together with vegetables and yuba, so we try to fill up the bamboo basket just before we ship it, and we ensure that each pike conger in the pack is in excellent condition. The most important point is to serve this eel at its best. Heat the pike conger to your liking. Make rice porridge with the soup you cooked in to enjoy the remaining pike conger left in the soup.” From the staff.