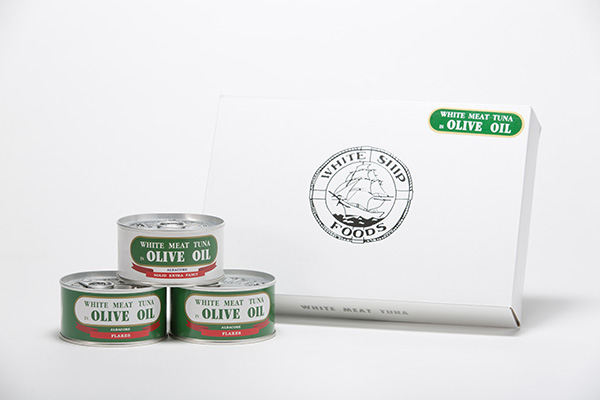 ＊Package shape varies according to price.
＊Product design is subject to seasonal variation.

The harbor town of Yui is located roughly halfway down the coast of Shizuoka Prefecture. Here you will find a very special brand of canned tuna that can be found in every home and is a popular choice of souvenir or gift around town.

This is the famed Premium Tuna in Olive Oil, made by Yui Canning.

Yui Canning has been producing a range of fine canned food products for many years, using only select quality ingredients and exacting production techniques. It is a much loved institution in the town and enjoys widespread support from the local community.

The famed Premium Tuna in Olive Oil, much beloved of the local populace, is not to be missed.

Why does Premium Tuna in Olive Oil from Yui Canning make a great gift? Let's look at some of the reasons.

It's not just the tuna—the oil is superb too

When you open the can you are greeted by the sight of delicious white tuna flesh while the subtle aroma of olives fills the nostrils.

And when you try it, you notice that there is no fishy odor, just the simple unadulterated goodness of tuna. The oil is smooth and light, without the overpowering aroma of olive oil—the perfect way to accentuate the natural flavor of tuna. Indeed, the tuna flavor permeates into the oil to the extent that it makes a delicious treat on its own.

Great in cooking, delicious as is

The green can is flaked tuna, broken into pieces like the standard canned tuna we are used to. Flaked tuna is great in salads and sandwiches as well as for cooking.

The white can denotes fancy tuna, where the tuna is packed into the can in large chunks that are still intact. It looks wonderful when served up on a plate.

Employees are proud of their very own creation

The distinctive label on the Premium Tuna in Olive Oil can features a white sailing ship.

This is the logo of the Yui Canning brand, called White Ship. According to Daisuke Kawashima,

the brand was created around 30 years ago, back when Yui Canning was just an OEM supplier, as an initiative of the employees.

The harbor town of Yui, home of Yui Canning, is located about half-way along the coastline of Shizuoka Prefecture, framed by mountains behind and with views across Suruga Bay to the imposing Mt. Fuji. With a temperate climate and friendly locals, life in Yui is peaceful and unhurried.

Suruga Bay is well known as a source of spotted shrimp, and the region in general offers good access for transporting produce by sea. There was an extensive canning industry at one time, and the streets of Yui were lined with canneries.

Yui Canning was established in 1933, originally as an export operation servicing markets in Europe and the United States. In the face of declining exports after the war caused by exchange rate volatility, Yui Canning switched its attention to subcontracting to domestic food producers primarily as an OEM supplier.

“When we were operating as a sub-contractor, the main aim was to grow the domestic market,” explains Kawashima, “so price rather than quality was the key objective. But we were increasingly getting feedback from our employees saying that they wanted to make a product that they could actually take pride in, something that they would be prepared to eat at home or give to friends.”

The concerted campaign by the employees eventually led to Yui Canning launching the White Ship brand, which was to be defined by a focus on quality rather than price.

White Ship was chosen as the brand partly because it harks back to the company’s early days as an exporter, when the name was also used. Today, the White Ship brand is synonymous with quality, both of source material and production techniques.

“At first it was just the workers who were buying White Ship,” recalls Kawashima. “Then by word of mouth it spread to friends and family, and soon it was something that locals would give to one another as a present. One thing led to another, and now we’re taking orders from all over the country!”

Thus continues the story of White Ship canned tuna, the product that departs the port town of Yui carrying the pride and expectations of countless Yui Canning employees to delight the taste buds of consumers all over Japan.

The secret to perfection in a can

Premium Tuna in Olive Oil is just one of the products marketed under the White Ship brand. It harks back to the export days of Yui Canning but has been reworked for the domestic market. We asked Kawashima to tell us the secret behind the famous flavor.

“We use bincho-maguro (albacore tuna), the highest grade of tuna available for canning,” says Kawashima. “Not only that, we source all of our bincho-maguro exclusively from the seas around Japan during the summer months, which is prime season for this species. We take great care during the grading process; only the freshest possible fish, with plenty of fat through it and beautiful white flesh, makes it through.”

Bincho-maguro is popularly known as white meat, so brilliant is the flesh. Yui Canning pairs the delicious white meat with the finest selected olive oil to enhance the natural flavor.

“Extra virgin olive oil is generally held up as the very best type of oil,” says Kawashima, “but we find that in the case of canned tuna you actually don’t want extra virgin because it has quite a pronounced flavor profile. And the deep green of extra virgin affects the whiteness of the flesh. So we use pure olive oil, which has a more neutral flavor and color.”

But wait, there’s more to it than that: the final piece of the jigsaw, the last important element that goes into producing the incredible taste of Premium Tuna in Olive Oil, is the unique process of maturing the product for a full six months in the can.

It turns out that in the case of high quality canned tuna, the flavor actually improves the longer you leave it before opening, because it allows the essence of the sea to permeate into the oil. “Even though we put a Best Before date of three years on the can, we keep the product for the first six months and don’t ship until after that,” says Kawashima.

Those who try Premium Tuna in Olive Oil from Yui Canning are routinely amazed at the excellent flavor. “I didn’t know canned tuna could be this good!” is a common response. Or, “I’ll never buy another brand ever again!” This is of course music to the ears of Kawashima and the staff or Yui Canning.

Premium Tuna in Olive Oil is available from the factory direct outlet at Yui Canning and can also be ordered online. Each and every can encapsulates the pride of the employees and the local community in it.