TOP > OKURIMONO > A century of history behind the Japanese baumkuchen
< PACKAGE > 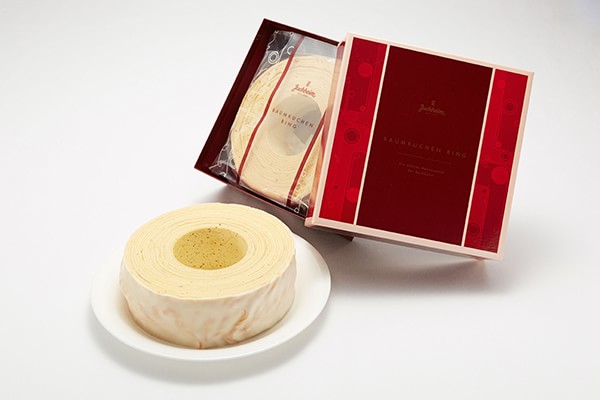 In this edition of Okurimono we take a look at baumkuchen, the humble German cake that has become a household name in Japan. The distinctive concentric rings of the baumkuchen are seen as a symbol of prosperity and longevity, and this makes the baumkuchen a popular favorite at celebrations and festive occasions. Baumkuchen was first introduced to Japan by German baker Karl Juchheim nearly a century ago. His legacy is carried forward at Juchheim, which is still producing the legendary baumkuchen at its Kobe premises today. The story of Juchheim is synonymous with the history of the baumkuchen in Japan. Now, let us delve into the secrets behind those bewitching concentric rings and find out how baumkuchen has cemented its place in Japan as the perfect festive gift.

The editorial team here at SHUN GATE was lucky enough to receive a Juchheim baumkuchen to try. In this article, we give you our impressions of this product, including taste, appearance and other important considerations.

An elegant and refined taste yet with direct appeal

Open the elegant box and you are immediately greeted with the familiar concentric rings of the baumkuchen and their associated historical implications. Each delicate ring is a work of art in itself, while the white chocolate icing adds an extra layer of refinement.
The moist sponge crumbles delightfully in the mouth, releasing an agreeable natural sweetness as it does so. The sponge, made without additives such as emulsifiers or expanding agents, boasts a wonderfully light, firm and ever so slightly chewy texture. The delicious white chocolate icing adds just a hint of extra sweetness and sharpness to complement the soft sponge. As it is not overly sweet, baumkuchen boasts a broad appeal that extends even to those who generally avoid sugary foods. Free of unnecessary additives, it offers a subdued all-natural sweetness that has been cherished for nearly one hundred years in Japan.

A hundred years of growth rings in Kobe

The SHUN GATE team travels to the Juchheim store at Kobe to learn more about the one-hundred year history of the company and explore the secrets of their delicious flagship product.
The city of Kobe in Hyogo prefecture has a long and proud history as a flourishing trade port, and has often served as a conduit for the influx of Western culture. It is a picturesque city, stretching along the coast from east to west with the Rokkosan mountains looming directly behind. The locals in Kobe tend to dress a bit more smartly, and the famed “million-dollar” night-time panorama is a sight to behold. The city has a distinctly international flavor that gives it a qualitatively different ambience to other cities in Japan. As a city that had always been receptive and welcoming to Western culture, Kobe was quick to embrace the traditional German baumkuchen.
The first baumkuchen in Japan was baked a hundred years ago by Karl Juchheim during his time in a prisoner-of-war camp in Hiroshima, when the prisoners were asked to put on an exhibition at the Hiroshima Prefectural Industrial Promotion Hall, better known today as the Atomic Bomb Dome. After his release, Juchheim opened up a store at Yokohama, but it was destroyed in the Great Kanto Earthquake of 1923 and he relocated to Kobe.
As a port town, Kobe has always had a significant foreign resident population. Juchheim’s new cake shop quickly became popular among the locals and developed a reputation for excellence. Happily, the shop did not close following the death of founder Karl, and this reputation was sustained through the dedication of other bakers in Kobe. The way in which the baumkuchen has established itself as the default gift for festive occasions in Japan is testimony to the enthusiasm and commitment of those who have dedicated their lives to preserving the legacy of Karl Juchheim over the last century.

The finest quality ingredients crafted by hand in the Juchheim tradition

Everyone is familiar with the striking symmetrical rings of the Juchheim baumkuchen, and the natural assumption would be that the rings are mass-produced on a production line. So it is surprising to discover that they are produced by hand, under the watchful eye of an experienced meister.
One such meister is Mr. YoshiGa, who successfully completed a rigorous training course culminating in national accreditation in Germany. YoshiGa oversees the painstaking process of crafting each individual baumkuchen. We learn that Juchheim insists on constant monitoring of all stages of production, with minimal use of machinery, an approach that would be considered highly inefficient by today’s standards. YoshiGa invites us to watch part of the production process at the testing workshop behind the Kobe main store while he explains the secrets of the baumkuchen.

The key to the perfect baumkuchen is in the batter. Founder Karl Juchheim and his wife were dedicated to producing a delicacy that would be healthy as well as tasty, and from the outset they eschewed the use of additives.
In order to achieve the characteristic soft yet firm texture of the baumkuchen, you have to separate the egg yolks from the whites then beat each separately. Of course, this means twice as much work. But it’s the only way to produce that distinctive baumkuchen softness without additives. The yolks contain a natural emulsifier while the whites have excellent foaming properties, so there’s technically no need for additives such as emulsifiers and expanding agents.
The caster sugar is the same as that used in Japanese confectionery. It has a slightly higher moisture content than conventional granular sugar and tends to brown more easily.

It is also slightly sweeter and adds moistness to the baked product. Juchheim also insists on a special butter that is custom-made without lactic acid bacterial fermentation. It has about 2% lower moisture content than conventional butter and does not melt as easily. The butter blends readily into the batter to enhance viscosity and elasticity and maintain it in good condition.
“The moisture content may be only 2% lower,” explains YoshiGa, “but it makes all the difference to the batter.” The baumkuchen recipe is really very simple, which makes it all the more important to use the very best ingredients and lavish it with care and attention.

The batter is finished and now it’s time for baking in the long, custom-made baumkuchen oven. Meister YoshiGa instantly takes on an air of intense concentration. This is where he will carefully add nearly 20 rings of batter to the rotating shaft over a period of about 40 minutes.
“Because of the centrifugal force on the shaft, the batter can lose its shape easily if you’re not careful,” explains YoshiGa. “You have to be constantly smoothing it over by hand to ensure uniform thickness all the way around. As soon as it’s browned off nicely you add the next layer, and the cycle starts again.”
YoshiGa never lifts his gaze from the slowly revolving shaft, monitoring each layer for shape, thickness and color. Gradually the baumkuchen starts to take shape, and the delicious aroma of freshly baked cake fills the room.
Apparently sometimes the combined weight of all the layers can be enough to dislodge the baumkuchen from the shaft. The meister’s face is a study of concentration right to the end. It is obvious that he takes great pride in his work. The baumkuchen is indeed a labor of love. Baked to a handsome golden brown finish, it is a feast for the eyes as well as the palate.

Yoshida has been present throughout the entire process, from preparing the batter through to baking the final layer. It has been fascinating to watch a meister at work, to witness his dedication to the craft of confectionery making.
Juchheim has been producing the finest baumkuchen in Japan for 100 years now, thanks to their commitment to quality and care in the manufacturing process. Without doubt, the contribution of Juchheim has had a major role in the broader narrative of the evolution of baumkuchen in Japan, to the point where baumkuchen from Japan is today famed throughout the world.

Everyone knows that freshly sliced Juchheim baumkuchen is one of the great culinary pleasures in life. At the Juchheim main store in Motomachi, Kobe, you can by baumkuchen pieces by weight. Customers are careful to purchase only as much as they can eat on the day, to ensure maximum freshness. There is also an exclusive Handmade Meister Baum version prepared by the meister himself and available only at Motomachi. There is a tea salon upstairs and a restaurant downstairs where you can enjoy authentic baumkuchen in a classical ambience that transports you to another world. So next time you’re in Kobe, be sure to pay a visit to the Motomachi store where you can sample some delicious baumkuchen made the old-fashioned way and steep yourself in the history of this most wonderful baked treat.